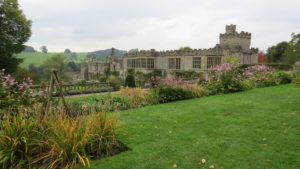 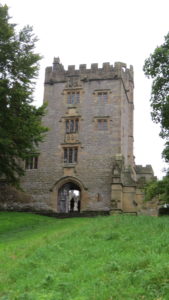 We had another marvelous day. Today we went to Haddon Hall, the medieval manor house of the Duke of Rutland, now occupied by his brother Lord Edward Manners and his family. I had researched at Haddon Hall 2-1/2 years ago with my British colleague Peter Foden and knew I had to take my cousins there on our Grand Wilcockson tour.

The Manners family owned the manor of Ilkeston when my Harvie family lived there. (My Puritan William Wilcockson married Margaret Harvie of Ilkeston. See Day 4.) Peter and I were given permission to research in the Ilkeston manorial court records, which are in the privately owned archives at Haddon Hall. Access to private archives like this one is entirely a matter of “grace and favour.” Peter did the records in Latin and I did the ones in English.

We found the Harvies in the Ilkeston manorial records a number of times, including as I mentioned yesterday Richard Harvie lodging beggars and rogues in 1612. Richard Harvie, Nicholas Robinson, Wyddowe (that’s Widow) Gregory,  and William Gregorie were fined for breaking the Elizabethan law that prohibited lodging beggars and rogues. The Harvies were living in the manor of Ilkeston as early as 1537 when James Harvy was fined for breaking the assize on bread and ale. In 1547 William Harvy and Thomas Harvy, the sons of James Harvy, took possession of two cottages. 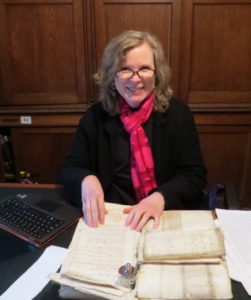 Researching in the Ilkeston manorial court records at Haddon Hall in 2015.

Likely Margaret (Harvie) Wilcockson was the great granddaughter of one of these men — through her father James (born say 1570s, died 1621) and his wife Elizabeth Winfield, then his father William (born say 1540s, died 1603) and his probable wife Emota, then his father potentially William or Thomas in 1547, then their father James in 1537. For those wondering about Puritan William’s wife being a Birdseye: Birdseye is a Stratford, Conn. family, and William and Margaret were married in England. There is no evidence of the Birdseyes coming from Derbyshire, and it’s pretty well-established that William and Mary (Harvie) Beardsley and Richard Harvie (Richard Harvey in New England) on the Planter were from Ilkeston, Derbyshire, with Puritan William and his wife Margaret coming from the area as well. In addition to the evidence that Jacobus presents, I have found that Richard Harvie Jr. was presented as a young man to the Ilkeston manorial court in 1633 and the court noted that he was taking possession of his father’s copyhold (that he had been bequeathed in his father’s will from 1616). These young men had just turned 21 and were attending the court for the first time. Richard Jr. appeared at court again in 1634, but not in 1635. I think he “sold” his copyhold including the two cottages that his father had and went to New England with the money he got from the “sale.”

Back to our day at Haddon Hall. Haddon Hall is now open to the public. It wasn’t when I was there on the last trip, but I did get a special tour. It is the 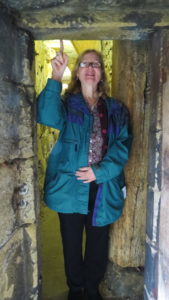 best preserved medieval manor house in England because it was unused for about 200 years while the family used their more comfortable abodes (like Belvoir Castle where the current Duke of Rutland lives).

Chet, Pat, Marilyn and I wandered from room to room just taking it all in. We spent most of our time in the gardens going from level to level to level. Watch the virtual tour to get a sense for what we saw: http://www.haddonhall.co.uk/history-and-virtual-tour/virtual-tour

I had to do a double-take when I used the toilet at Haddon Hall. The sign had a baby (for a baby changing station), a woman and a man. I walked through the door expecting to see doors to a men’s room and a woman’s room. Instead I found three stalls and two sinks. I wondered if I had walked into the wrong toilet, so went back out to make sure. I wasn’t mistaken. It was a unisex toilet. By the time I was done, two men were in there with me. It’s not the first time I’ve had this experience in Europe. In fact it’s not even the second time I’ve had the experience. I laughed about this with a Haddon Hall docent and she said the men used to have to go out of the hall and down the hill to a men’s room and they complained so much that the hall made the one in the hall a unisex toilet. 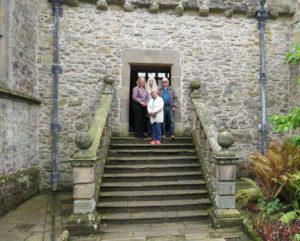 The best part of our day at Haddon Hall was at the end when a docent offered to take our photo at the top of some steps leading into the hall. He told us that we were on Dorothy’s steps. Dorothy Vernon was the daughter of the lord of the manor in the 1500s. She fell in love with the second son of another noble family whose prospects weren’t good enough for her father. She eloped, leaving the hall through the door where we stood and went down the steps that were there at the time. When Dorothy’s dad died, his two daughters split his properties with Dorothy inheriting Haddon Hall. She married John Manners and that’s how Haddon Hall became connected to the Manners family and the manor of Ilkeston. See below for more photos of Haddon Hall.

We had lunch at the Haddon Hall restaurant, in the converted stables. I had a wonderful beef and mushroom 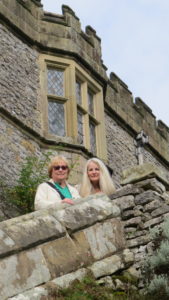 casserole while Chet and Barry tried the gammon (ham), apricot and brie pie which they said was wonderful too. All of these tourist draws are new to Haddon Hall in the 2-1/2 years since I was there.

After lunch Barry hiked to Bakewell while the rest of us finished our tour of the hall. We met at the Bakewell Pudding Parlour for a Bakewell Pudding which I call a Bakewell Tart. I guess there is a difference between the two, but in the four times I’ve come to England and make the trek to Bakewell, whatever pudding/tart I had was delicious. It’s a pie with almond custard and raspberry jam filling. Yum! We all had tea and tarts outside on the patio. 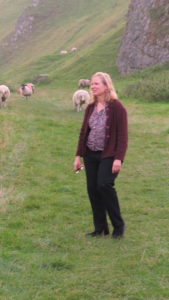 We then made an unplanned drive into the High Peaks District. Barry had his sights set on scoping out hiking trails near Castleton. We were in for an unexpected Wow! We drove through a pass between peaks, with unrestrained sheep on the slopes — a few of which 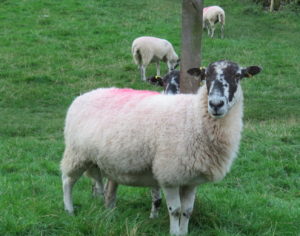 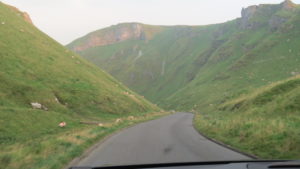 We’ve been filling ourselves with big lunches the last few days and coming home to have cheese and crackers for supper. Tonight I finished the leftover mushy peas from our fish and chips dinner a few nights ago. Another yum!

We’re leaving Derbyshire tomorrow, and heading south to pick up the Wilcockson trail closer to London. 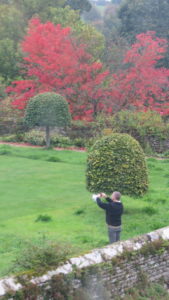 Barry in the Haddon Hall gardens. 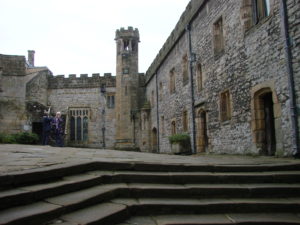 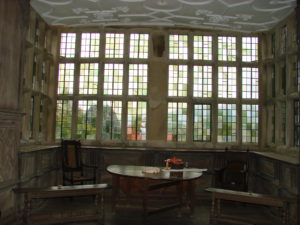 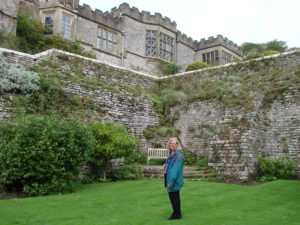 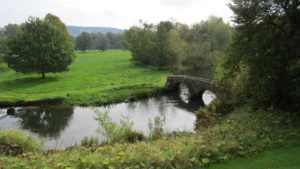 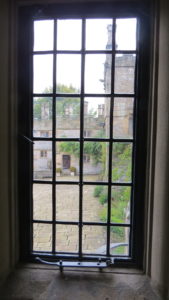 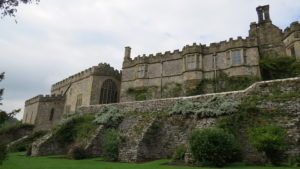 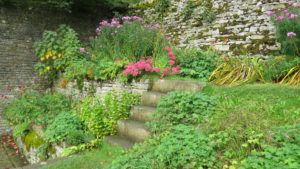