The preceding post here provides background on the Wilcockson Billie and Boonie lines.  This post discusses how those Wilcockson lines relate to a group of Hutchinson and Giddey surnamed Big Y testers. For this discussion, please consider the following figure. 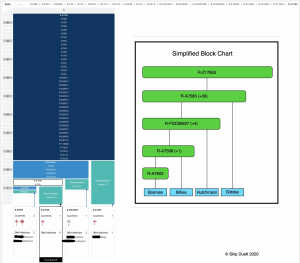 The current lone Billie tester does not share SNP A7603.  He shares all prior SNPs, but not this last one.  Therefore, the Billie branch split off the Boonie branch with some common ancestor prior to Cossall John. Traditional paper research tracks the Billie line back at least to William Wilcockson (b. 1601-d. 1651) commonly called “Puritan William.” Evidence suggests Puritan William’s line goes back to Thomas Wilcockson (b. say 1525, d. 1601) of Biggin by Hulland.

All three Wilcockson testers share SNP FGC69927 and the four phylo-equivalent SNPs in that block.  Two Hutchinson men also share those SNPs but not subordinate A7598 block or A7603.  The Hutchinson line splits off before the MRCA of the three Wilcockson testers. This must have occurred at least two generations before Cossall John and likely before the early 1500s.  In a similar way, the Giddey line branched off at least one more generation before that.  While it is dangerous to place too much weight on SNP mutation rates, the fact that the SNP block for FGC69927 contains five SNPs makes it more likely the Giddey line split off many generations earlier.

Consider for a moment, this idea of the Hutchinsons or the Giddeys branching off. This could be an MPE, a Misattributed Parentage Event—an illegitimacy or extra-marital affair.  It could be that a Wilcockson male fathered a child with a married or unmarried Hutchinson female.  But it could just as easily have been the other way around, a Hutchinson male fathered a child with a married or unmarried Wilcockson female.  The MPE could also be an adoption where a child takes on the surname of his stepfather. From the data we have so far, we cannot tell.  The same is true with the Giddey branch.

Documentary evidence suggests the Wilcockson-Hutchinson interconnection likely occurred in Biggin by Hulland. The so-called 1415 Coucher Survey of Biggin shows a Huchonson family living in Biggin at that time, but no one surnamed Wilcockson yet. By 1440, the Wilcockson surname is documented in Biggin.  The two families are documented as in-laws and associates from the 1400s to the mid-1600s in Biggin.

Of course, another possibility is the MRCA of the Hutchinsons and Wilcocksons lived prior to the adoption of hereditary surnames and there was no MPE at all. This is even more likely regarding the Giddey split.

2 thoughts on “Big Y DNA: Wilcockson vs. Hutchinson vs. Giddey”