The Grand Wilcockson Tour to Derbyshire Day 2: Wirksworth and Carsington 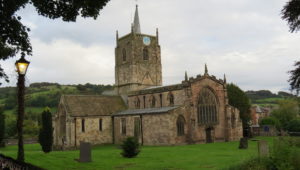 We had the perfect day. 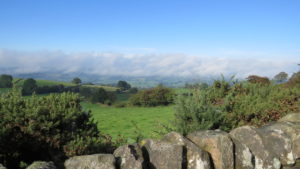 The view this morning driving from Spout Barn, our accommodations, to Wirksworth village was worth stopping the SUV in the middle of the one-lane road and everyone with a camera getting out of the car to take some photos. Luckily no other car wanted to go by. I got my driving-on-the-left-side-of-the road bearings back with some sleep (I was dead to the world for 9-1/2 hours last night) and drove today. 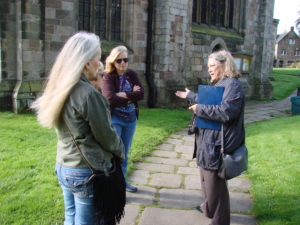 We started the day meeting our distant Wilcockson cousin Deborah Hart Stock at St Mary the Virgin church in Wirksworth. I first met Deborah somewhere online a few years ago, and then met her in person 2-1/2 years ago when I was last in England researching. She descends from Puritan William Wilcockson and Margaret Harvie through their daughter Sarah (Wilcockson) Meigs. My Wilcockson line also connects to the Meigs family in Guilford and Killingworth, Conn., so Deb and I are doubly and probably triply cousins. Deb drove from the London area to join us for two days. Her father was American and her mother was British. 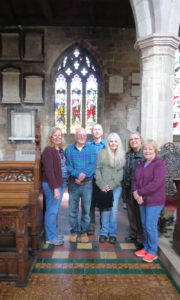 Jane, Chet, Barry, Marilyn, Deborah, and Pat at St Mary the Virgin church in Wirksworth, home parish of the Wilcocksons. 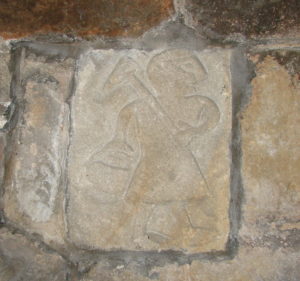 St Mary the Virgin church was the home parish of the Wilcocksons in Nether Biggin. The Wilcocksons appeared in the Wirksworth church marriage and baptism records throughout the 17th and 18th centuries, from as early as the church records start — 1608. The church was built by the Normans (who invaded England from France with William the Conqueror in 1066) in the 1200s. It was built over an earlier Saxon church. Inside are some Saxon motifs carved from stone and set into the stone blocks of the church walls. One of the most significant carvings in the church is the lid of a sarcophagus. It was found buried in the church yard. It’s believed to have covered the body of Betti, one of four missionaries who brought Christianity to the Midlands in the AD600s. Another much smaller carving is a lead miner. 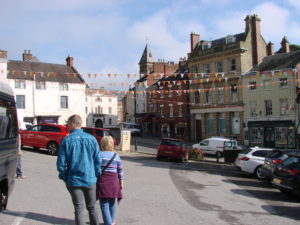 The village of Wirksworth was both a market town and a fair town in Puritan William Wilcockson’s day. Markets were held weekly and fairs were held quarterly. The former were for selling produce; the latter for trading livestock, finding employment and other more seasonal things. A town needed to get a royal charter to hold a fair. The Wilcocksons from Biggin probably would have come to Wirksworth for both the market and the fair, with tanner William likely selling some of his leather. Biggin is only 4 miles from Wirksworth. 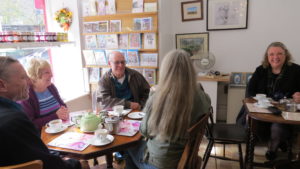 For lunch we ate at the Tea Room. We collectively had corned beef hash, a sausage roll, quiche, and a tuna bap. A bap is a sandwich. We couldn’t leave without having scones with butter, and of course we had tea. The proprietors were a cute couple probably in their 80s.

After lunch Barry went off on his own to do a 5-mile hike around the perimeter of Wirksworth where he discovered Highland cows, lead and rock quarries, and Travelers a.k.a. gypsies. 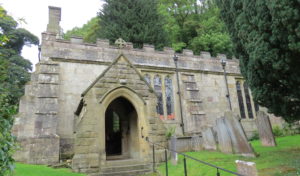 The rest of us drove into the hills west of Wirksworth to Carsington where we visited St Margaret’s church, a very small chapelry where the Gell family worshipped. The Gells were the lords of the manor of Wirksworth and owned the land that the tenants, called copyholders, leased. Some of the Gells had their tombs and effigies at St Mary the Virgin church in Wirksworth. Wirksworth was also their home parish, but they had the chapelry built in Carsington so they wouldn’t have to travel so far. The Gell’s nearby manor house was closed for visitation today. 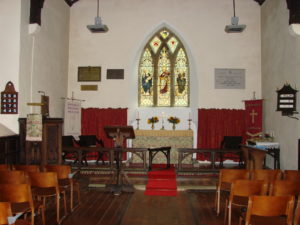 To complicate things even more, Biggin was also part of Hulland Ward, which was part of the royal forest called Duffield Frith (think Robin Hood and Sherwood Forest). The frith was another jurisdiction where we find the Wilcocksons. Between the manor and the forest juridictions, the Wilcocksons show up in two sets of court records regarding Biggin — the manorial court records for Duffield Fee where they were receiving and conveying copyhold land and paying their rents to the lords of the manor and the Duffield Frith court records where they were fined for cutting down the king’s trees and letting their pigs graze on the king’s land (called pannage). Tanner William’s father, Thomas, was fined for “falling” diverse oaks in the royal forest and then giving the wood to his son William in 1581 when Queen Elizabeth was monarch. The woodmote (forest) court record noted that Thomas of the manor of Biggin did this on a copyhold parcel called Riddings — which was the same parcel that tanner William received in 1577 and still held in 1611. (You can see how these named parcels of copyhold land help link generations.) 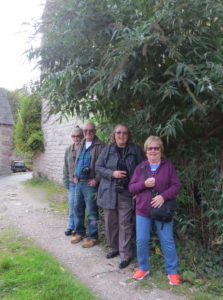 Taking refuge from the rain on our walk through Wirksworth. 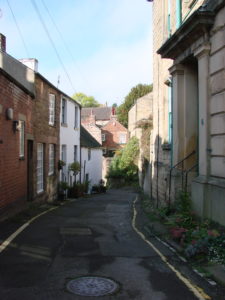 After Carsington, Pat, Marilyn, Chet, Deb and I then walked around the village of Wirksworth, and among other things discovered the Baptist cemetery. We explored narrow alleys and cobbled walkways until it was time for dinner. We saw the Barmote Court where the lead miners held their court. This court in Wirksworth is believed to be the oldest trade court jurisdiction in the world – established in the 13th century.  See Barmote Court. Wirksworth had a huge lead mining industry at the time the Wilcocksons lived in the area, but there is no evidence that the Wilcocksons profited or worked in the mines.

On our walk through Wirksworth we saw the outline of a 15th century house, called the Cruck House, that is visible on the end of a new house. See photo below. 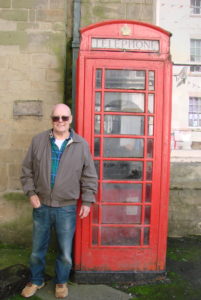 Later Barry found us back at St Mary the Virgin church. He had stopped at the Ale House after his hike. With only £3 and some odd change in his pocket, he put that on the counter and asked the bartender what he could get for that amount. The bartender said a pint of beer and Barry was happy. When he had finished his pint, Barry had to go find the banker of the group who had all our English money (that would be me) in order to ask for a fiver to go back and get another pint. After wandering a little more, we eventually found Barry back at the Ale House where he tried to ignore us when we poked our heads in the door and waved.

We had dinner at Le Mistral, an obviously French restaurant with wonderful food and 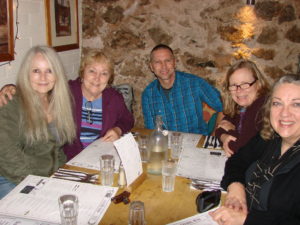 desserts. My entre was a wonderful beef bourguignon. The restaurant has tables in the basement, so we ate surrounded by stone block walls in a small room. We laughed and laughed and laughed through all courses of the meal — so loudly that we figured our neighbors at the table next to us would think us loud Americans — eventhough one of us was a Brit (with some American roots). We laughed a lot today.

It was a delightful day, and we’re looking forward to tomorrow’s day trip. 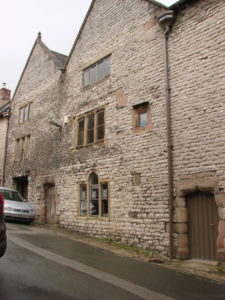 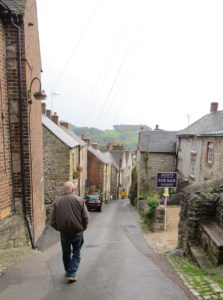 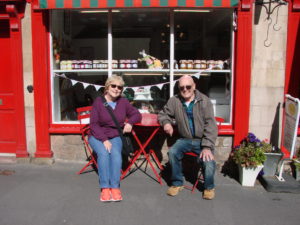 Outside the Tea Room. 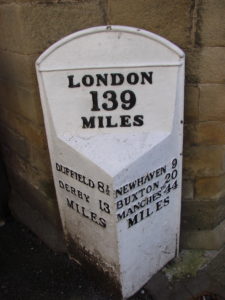 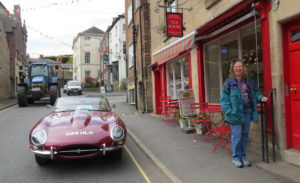 My carriage awaits me outside the Tea Room. Is it the car or the tractor? 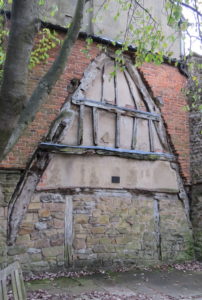