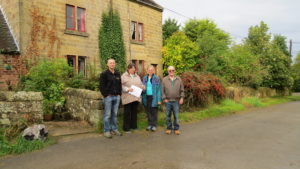 Now for the story of our trip… 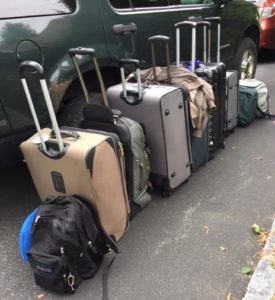 We arrived safely at Heathrow on 21 September 2017 after departing JFK the evening before at 8:00pm. We had gathered the day before at my cousin Chet’s home on Long Island and were shuttled to the airport. My cousin Jim’s wife Pat and his son Barry had flown in from Tampa. Pat’s sister Marilyn had driven from Maine and I had driven from Albany. The adventure began with the five of us!

It was an exhausting and almost sleepless 24 hours since our departure from Chet’s!

The usual glitches greeted us in London. The smartphone I bought two years ago (only $100US with all the bells and whistles a U.S. Droid has, BTW) for GPS directions and communication with my researcher-colleagues in England was locked and I hadn’t written down all my security codes and numbers to unlock it. We needed the phone for Google Maps and communication again, so I ended up buying a new smartphone for this trip — one that isn’t locked! 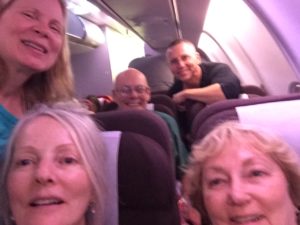 Jane, Marilyn, Chet, Barry and Pat getting ready to depart JFK for the trip of a lifetime.

Then we had a change in plans with the car rentals. Instead of two smaller cars we ended up in one Mercedes SUV with Sat Nav. So much for the smart phone — or so I thought to start. Google Maps on the smartphone came in very handy as we traveled north to Derbyshire where we were heading to pick up the Wilcockson story from the 1500s and 1600s. Barry took the reins with the car to start as I wasn’t too comfortable driving such a large car with sleep deprivation from two consecutive nights. It was his first driving experience in England and he did wonderfully!

We had a 3:00pm appointment with local historian Wendy Whitbread of Biggin-by-Hulland. I had met Wendy 2-1/2 years ago on my last research trip to England when I drove to Biggin-by-Hulland and stopped a man in his field to ask a question. He said I should ask his sister who was writing a history of Biggin. His sister was Wendy, and Wendy knew of the Wilcocksons. 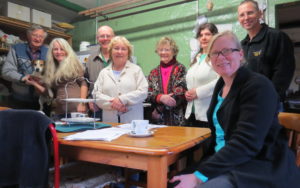 On this trip Wendy and her parents, Bill and Maureen, invited us in for some wonderful Yorkshire tea. We chatted about their 17th century house, admired all the tea cups they had collected, and looked at maps of Biggin that I had brought. Wendy then showed us around what was known as Nether Biggin as we walked the roads where I believe our Wilcockson ancestors lived. “Nether” means lower. A cluster of perhaps six to eight houses makes up Nether Biggin today.

Here’s the long Wilcockson story in short: Through exhaustive research by me and three professional genealogists/historical researchers in Derbyshire and London whom I had engaged periodically since 2002 when I first went to England for the Wilcockson research (Peter Foden, Simon Neal, and, with a special thank you, Celia Renshaw), as well as a read of a very early draft of my research findings by Robert C. Anderson, the Puritan Great Migration expert at the New England Historic Genealogical Society in Boston, and using Y-DNA evidence, I’ve come to the conclusion that my Puritan William Wilcockson was probably the son of a tanner, William Wilcockson, of the manor of Biggin. Biggin was a submanor in the manor of Duffield Fee in Derbyshire, and Duffield Fee in turn was part of the Duchy of Lancaster. When the Lancastrians became kings of England with Henry IV in 1399, so too the manor of Biggin became a royal manor at that time.

Tanner William Wilcockson, born ca. 1553 and died in 1626, was the son of Thomas Wilcockson, perhaps born ca. 1520 and who died ca. 1601. We find this relationship between father and son in several records from 1581 and 1612. Tanner William had two living sons named William when he wrote his will in 1626: his eldest son William and his younger son William — one from each of his two wives. 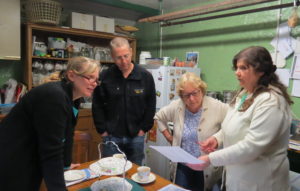 What happened to my Puritan William? He was sent off to learn weaving, perhaps with members of his mother’s family — uncles or a grandfather — or perhaps with Wilcockson kin who were weavers. The passenger list for the Planter tells us that Puritan William was a linen weaver. 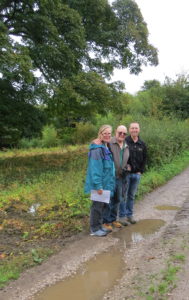 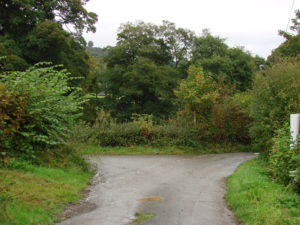 The Wilcockson tan yard in Nether Biggin, at the fork in the road. Photo by Chet Wilcox. 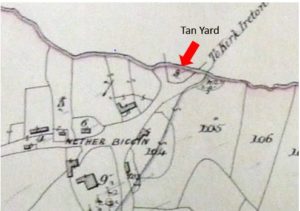 So that brings us to Nether Biggin and the tannery. An 1841 tithe map of Biggin shows a “tan yard” and names all the parcels of land that made up Biggin. The parcels had names like Ruddings a.k.a. Riddings, le Netherfeild [sic], Towne Feild, and Kill Croft — names that show up in the Duffield Fee manorial court records where we find tanner William from the submanor of Biggin in the 1500s and 1600s. See the tithe map on the left.

The tan yard is still in Nether Biggin. It is an open space with a huge tree. Seeing the tan yard was probably the highlight of the day — a concrete location for tanner William and his son, our Puritan William. In the photo above, Chet, Barry and I are standing in front of the tan yard as it is seen today. See the photo below of the house that is standing where tanner William’s house probably stood some 500 years ago.  The Ecclesbourne River runs at the back of this property and at the back of the tan yard. Biggin is in the Ecclesborne Valley and is in an out-of-the-way place. There are no roads that pass through Biggin; the one-lane road goes to Nether Biggin and stops.

The Wilcocksons first appeared by name in Biggin in 1440 in the Duchy of Lancaster manorial court records. A John Wilcokson of Biggin was present at the court and appointed hayward (hedge/fence warden) for Biggin and a William Wilkocson of Biggin was present and fined for breaking the ale brewing laws. Prior to that a survey of Biggin land and landholders (called Coucher’s survey) had been taken in 1415, but there were no Wilcockson families in Biggin at that time. Hereditary surnames (meaning they were consistently passed from father to the next generations) were just taking hold in the north and west of England then — the practice having spread from London and the south and west, so it’s possible that the Wilcockson forefathers were going by another name when Coucher’s survey was taken.

The name Willeson (Wilson) was in the Biggin survey in 1415. It’s possible that a Willeson was known as Little Will and he had a son who took on the surname Wilcockson. The meaning of the Wilcockson surname is Little Will’s son: Wil = William; cock = used as a diminuative, like little or small; and son = son (son comes from Scandinavian patronymic influences in England, by the way). It’s also possible that the Wilcocksons arrived in Biggin between 1415 and 1440 from the northeast where the Wilcockson surname is first found in the 1330s in Cumberland County and in the 1370s in Yorkshire in subsidy (tax) records.

The rest of the Wilcockson story will unfold as we undertake our Grand Wilcockson Tour in the next few days.

We’re staying at a converted barn in Shottle, only 10 miles from Biggin. We’re in the heart of Wilcockson country! Spout Barn is a holiday house with a kitchen, sitting room, three bedrooms and other amenities. We went to the grocery store (Morrison’s) to buy food for breakfasts and then had our first fish and chips of the trip for dinner. I insisted everyone try them the English way — with salt and vinegar on both the fish and chips. I also insisted that everyone try the mushy peas – which are exactly what you are thinking. Mushy. These peas were particularly good. 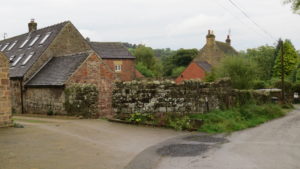 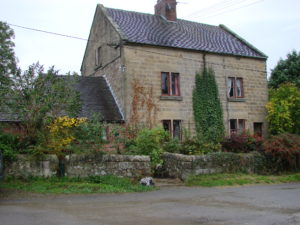 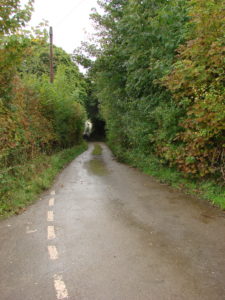 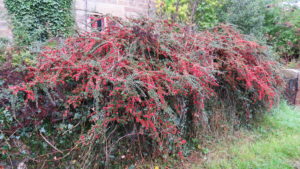 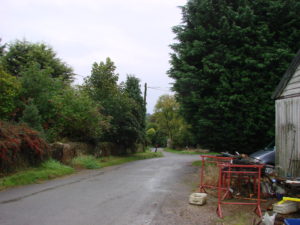 To the left is the Wilcockson property from the 1500s and early 1600s in Nether Biggin.  Photo by Chet Wilcox.