Day 7 was one of those days. I woke up at 2:30am and couldn’t get back to sleep. We stayed overnight in Amesbury near Salisbury where a clock tower chimed the hours. I was asleep shortly before 10:00pm and woke up at 2:30am, and  then I heard every chime from 3:00am to 6:00am while I waited for the alarm to go off at 7:00. No need for the alarm afterall. I was fried by the time we ended our day. 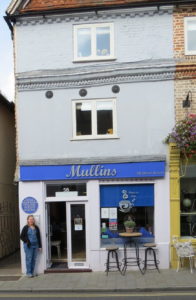 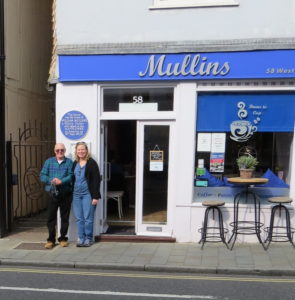 Chet and Jane, descendants of William Mullins and his daughter Priscilla.

Well, today on our way back to Hertz at Heathrow to drop off the car, we stopped at Dorking, Surrey, where Priscilla Mullins’s father William owned a house. It’s actually four separate stores now, as Nos. 58, 59, 60 and 61 on West Street. The house was built in the 1550s. A shoemaker, Mullins bought it in 1612. Priscilla, her father and his second wife, their son Joseph, and a servant all came over on the Mayflower. All but Priscilla died the first winter. Within a year or so Priscilla married John Alden, the cooper for the ship. I descend from their son Joseph.

William Mullins was an investor in the voyage rather than a Separatist, one of the religious pilgrims making the journey. Separatists were even more radical than the Puritans. They wanted to separate themselves from the Church of England rather than reform it. In England they are known as Brownists for Robert Browne. Browne was from Leicestershire – and as we now know, Leicestershire is very near the Wilcocksons in Biggin. So many different reform ideas were roiling around in the vicinity of the Wilcocksons in Biggin-by-Hulland, Derbyshire. (Puritan Divine John Cotton — in Boston, Massachusetts Bay when my Puritan William and his family arrived in New England — was born in nearby Derby, Derbyshire.) It’s no wonder my Puritan William got caught up in the religious fervor of the Puritans. 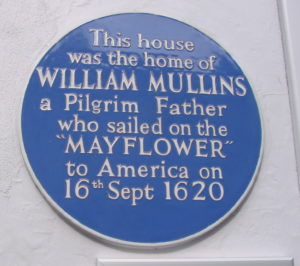 One of the stores in Dorking is named “Mullins.” Another store had hand-made pottery made in Poland, so I bought a bowl to remember my visit. I was surprised that a building from the 1550s was made of bricks. That may be a regional variation. I associate the wooden framed white stucco buildings from this period.

Before we went to Dorking, we went to Stonehenge first thing in the morning. At the exhibition inside, one of the volunteers engaged our group and began to explain a video that we were watching. Upon questioning from us, he then took us out into the exhibit and explained more. We had an impromptu guided tour of sorts. From there we took the shuttle out to the stones. I had been here on my last trip, doing the special access where you get to walk among the stones (but not touch them!) rather than walk on the walkway around the stones. It still was wonderful to be able to see them again albeit from a distance. The crows, who are the keepers of the stones, came out to the boardwalk to greet us as we walked by. 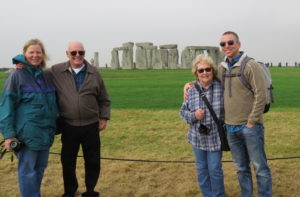 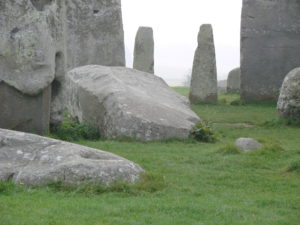 We returned the rental car after Dorking and took a shuttle to our hotel in London. We are now in London to resume our Wilcockson journey.

As I have done on every visit to London, we found an Indian restaurant and enjoyed what I think was one of the best Indian meals I’ve ever had. This one certainly made up for the first time here when I was so disappointed in the Indian restaurant I’d chosen. The hype about London Indian food that I had heard before I came to London the first time didn’t match the meal. This one did and then some. Yum! 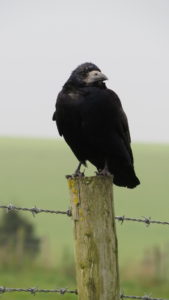 As I write this it is early morning on Day 8. I was asleep by 8:00pm last evening, I had a good sleep and I’m raring to go. It will be a busy day.