Who Do You Think You Are? LIVE from London

Last week I had the pleasure of doing two half-hour interviews at the Who Do You Think You Are? LIVE event in London at the Olympia London venue on 20-22 February. American genealogy blogger Dick Eastman was making his annual visit to the show and stopped to chat with me on Friday about the show from an American’s perspective.  WDYTYA? LIVE sales manager David Showler took a some time from his busy show schedule to talk with me as well on Saturday, the last day of the show. Both interviews were a lot of fun! 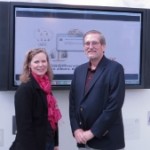 Jane Wilcox and Dick Eastman at the My Heritage booth at WDYTYA? LIVE in London on Friday, 21 February.

Dick Eastman has attended every show since its inception eight years ago. He likes it so much, he keeps coming back for more. He likened the show to an expo and shared why non-Brits would want to come to the show. He gave me, a first-timer, some tips to navigate the show, which routinely draws up to 13,000 people — not all at once, I learned. The show is designed for one-day attendees or three-day attendees. I was a two-day attendee on Friday and Saturday.

The interview with David Showler had some technical difficulties with the Skype connection and the broadcast comes in and out, fortunately more in than out. What David shared in his interview is worth hanging in there to the end. David explained that the commemoration of the 100th anniversary of World War I, or The Great War as the Brits call it, starts in August this year. David told us about The Lives of the First World War project (http://www.livesofthefirstworldwar.org/) that has been launched. It’s a chance of anyone with a Great War participant to share the story. WWI was very much in evidence at WDYTYA? Live this year.

I attended some of the lectures, including one by a law professor who talked about illegitimacy, marriage,

Olympic silver-medalist Colin Jackson talks about his TV experience on WDYTY? at the Celebrity Theatre in London.

divorce and bigamy during the WWI years and how genealogists can use the data to understand what they may learn about their ancestors during this period. I also attended the session with Olympic silver-medalist Colin Jackson who was featured in one of the WDYTYA? episodes on TV.  Colin’s story took him to Jamaica where he learned about his slave ancestry.